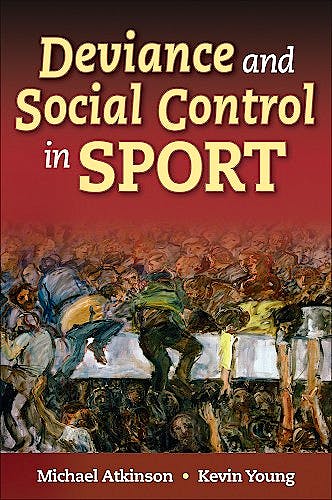 Deviance and Social Control in Sport

The world of sport offers a deep—and often-overlooked—source for the study of deviance and its development and impact on society. Deviance and Social Control in Sport challenges preconceived understandings regarding the relationship of deviance and sport and offers a conceptual framework for future work in a variety of sociological subfields.

Drawing on their cutting-edge research in criminology and deviance in the discipline of sociology, Atkinson and Young provide a textured understanding of sport-related deviance through the application of various approaches to deviance in a sport context. Using extended case studies, the authors examine the subject of deviance through examples that are popular (fan violence, hockey enforcers, effect of the media), understudied (sport-related violence against animals, athletes as on-field victims of violence), or emerging (sport security, drugs and weight control, cybernetic athletes, extreme sports). This engaging presentation allows readers to fully understand the effects of sport deviance in society.

Deviance and Social Control in Sport explains how forms of wanted and unwanted rule violation are produced by and mediated through social contexts in and around sport. As such, it explores

The text begins by presenting the theoretical background necessary for understanding deviance, followed by a look at deviance as an individual issue, how it is defined, and how authorities attempt to control it. The authors make the material accessible to readers by using case studies drawn from their own empirical research. The cases show how sociologists interpret and explain the actions of athletes as well as how deviance is layered by various levels of audience interpretation. Driven by a single theory or a range of integrated theoretical approaches, the case studies encourage readers to engage in differing perspectives about deviance in sport culture. The theories are further examined in each chapter through special elements called Theoretical Intersections, which highlight how the sociology of sport meets the sociology of deviance. Discussion questions and recommended readings synthesize the information and stimulate critical thinking and research to conclude each chapter.

By considering networks of social relationships and how they produce, define, and police rule violation and rule violators, Deviance and Social Control in Sport offers a nuanced and integrated explanation of sport deviance that accounts for the behaviors and practices of both individuals and teams. This interdisciplinary text challenges readers to explore the dimensions and analytic merit of a full spectrum of crime and deviancy theories, thus stimulating a broader discussion of rule breaking in sport.

In 2004, Atkinson was awarded the Social Sciences and Humanities Research Council of Canada’s Aurora Award. He resides in Quorn.

Young enjoys all sports, loves the outdoors, and is a passionate supporter of Liverpool Football Club. He resides in Calgary.

A reference for sport sociologists, sociologists, and criminologists; a supplemental text for upper-level undergraduate or graduate courses relating to social deviance to sport.