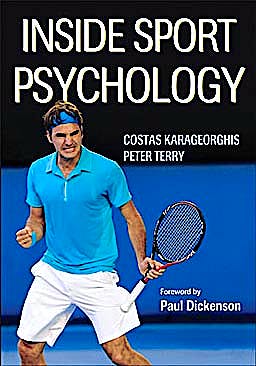 With Inside Sport Psychology, you’ll discover the relationship between mind, body, and performance. Learn about the techniques that have proven successful for today’s top athletes and teams and how you can adapt and apply them in both training and competition.

In this essential guide, renowned sport psychologists Costas Karageorghis and Peter Terry explain how to elevate performance through the application of evidence-based strategies and techniques such as these

With Inside Sport Psychology , you’ll go from competitor to champion!

Costas Karageorghis is internationally recognized for his research on the psychophysical and ergogenic effects of music. He is the author of 40 peer-reviewed and 80 professional articles in sport and exercise psychology. Karageorghis has also made 60 conference presentations nationally and internationally for which he has won several awards. His work has been featured in newspapers around the world, including the Times (London), Independent, New York Times, Wall Street Journal, Washington Post, and Sydney Morning Herald.

Peter Terry is a registered psychologist who has held professorial positions in the United Kingdom and Australia. As an internationally recognized sport psychologist, he has been a consultant at almost 100 major international events, including 8 Olympic Games, 18 World Championships, 30 World Cup competitions, and 9 Wimbledon Championships.

Terry has authored three books on sport psychology and more than 150 scholarly articles. He has served two terms as president of the Australian Psychological Society’s College of Sport Psychologists and sits on the managing council of the Asian South Pacific Association of Sport Psychology. He has also been a member of the British Olympic Association’s psychology advisory board, a long-time advisor to the Women’s Tennis Association, and psychology coordinator for the Queensland Academy of Sport. He is a fellow of both the British Association of Sport and Exercise Sciences and the Australian Psychological Society.

"I studied sport psychology under Costas and Peter in the four-year period before I won the superheavyweight gold at the Sydney Olympics. Since then I've enjoyed many high points and experienced a few low points in my professional career, but the principles that those guys taught me while I was at Brunel have always stayed with me. When I damaged my right shoulder and came back against the odds in the 11th to knock out Michael Sprott for the European title, I was thinking, Stay calm, focus on the here and now, just like I was taught all those years ago. I knew it was my time to shine again!" - Audley Harrison, MBE--Current European heavyweight boxing champion, former Commonwealth and Olympic superheavyweight boxing champion

“While at Brunel I studied sport psychology with both authors. During that period I learned techniques to improve my mental strength and composure under pressure. With the advent of professionalism at the time, those skills put me ahead of my peers. I realized that without psychological preparation, my physical attributes were insufficient. I realized that it was necessary to push myself toward the goals of becoming an international player and, ultimately, of winning the World Cup with England in 2003.” - Richard Hill, MBE--Former rugby union player for the England national team (71 caps) and British and Irish Lions (5 caps)
2003 World Cup winner with England

”I owe a lot to Peter for my success and ability to deal with the challenges of competing at the highest level of sport. He was an absolute rock throughout my career. He was always available at the other end of the phone to calm my nerves, remind me of the tools and techniques that he had taught me over the years, and strengthen my self-belief. The mental strength that Peter helped me develop is now also standing me in good stead for a life after sport.” - Anna Hemmings, MBE--Six-time world champion, three-time European champion, and two-time Olympian kayaker

“Shooting is more of a mental battle than a physical sport. Within three weeks of working with Peter, I set a world record of 193 clays out of 200. In the Olympic shoot-off to decide between gold and silver, I used the techniques he taught me to block everything out and won the gold. I couldn’t have done it without Peter.” - Richard Faulds, MBE--2000 Olympic gold medalist in double trap-shooting,Current world record holder,Eighteen-time world champion and Nine-time World Cup medalist