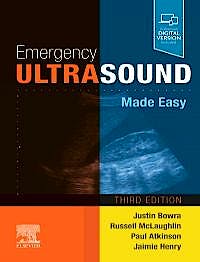 The use of ultrasound (US) in emergency medicine has proved invaluable in answering very specific, time-critical questions, such as the presence of an abdominal aortic aneurysm, or of blood in the abdomen after trauma. Unlike other imaging modalities (e.g. CT scanning) it is a rapid technique that can be brought to the patient with ease. Increasingly, and especially in developed markets, ultrasound systems are being designed with a specific clinical application in mind.

This book, Emergency Ultrasound Made Easy, is accessible and easy to use in an emergency. It is aimed mainly at specialists and trainees in emergency medicine, surgery and intensive care; but its broad scope (for example using ultrasound in the rapid diagnosis of DVT) makes it an invaluable addition to the library of any doctor with an interest in the technique, whether in primary care or the hospital setting.