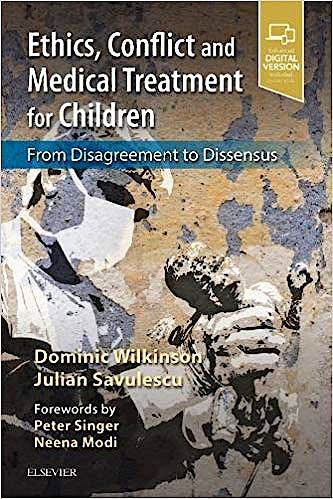 Ethics, Conflict and Medical Treatment for Children. From Disagreement to Dissensus (Print and Online)

What should happen when doctors and parents disagree about what would be best for a child? When should courts become involved? Should life support be stopped against parents' wishes?

The case of Charlie Gard, reached global attention in 2017. It led to widespread debate about the ethics of disagreements between doctors and parents, about the place of the law in such disputes, and about the variation in approach between different parts of the world.

In this book, medical ethicists Dominic Wilkinson and Julian Savulescu critically examine the ethical questions at the heart of disputes about medical treatment for children. They use the Gard case as a springboard to a wider discussion about the rights of parents, the harms of treatment, and the vital issue of limited resources. They discuss other prominent UK and international cases of disagreement and conflict.

From opposite sides of the debate Wilkinson and Savulescu provocatively outline the strongest arguments in favour of and against treatment. They analyse some of the distinctive and challenging features of treatment disputes in the 21st century and argue that disagreement about controversial ethical questions is both inevitable and desirable. They outline a series of lessons from the Gard case and propose a radical new 'dissensus' framework for future cases of disagreement.

This new book critically examines the core ethical questions at the heart of disputes about medical treatment for children. The contents review prominent cases of disagreement from the UK and internationally and analyse some of the distinctive and challenging features around treatment disputes in the 21st century. The book proposes a radical new framework for future cases of disagreement around the care of gravely ill people.