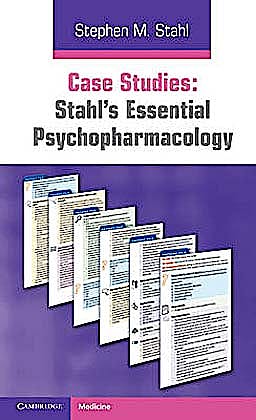 Designed with the distinctive, user-friendly presentation Dr Stahl's audience know and love, this new stream of Stahl books capitalize on Dr Stahl's greatest strength – the ability to address complex issues in an understandable way and with direct relevance to the everyday experience of clinicians. The book describes a wide-ranging and representative selection of clinical scenarios, making use of icons, questions/answers and tips. It follows these cases through the complete clinical encounter, from start to resolution, acknowledging all the complications, issues, decisions, twists and turns along the way. The book is about living through the treatments that work, the treatments that fail, and the mistakes made along the journey. This is psychiatry in real life – these are the patients from your waiting room – this book will reassure, inform and guide better clinical decision making.

• Describes treatment options for a wide range of psychiatric disorders • Explains what to try next if an intervention fails, and highlights possible mistakes and pitfalls so that the reader does not have to make them • Based on the new requirements for the American Board of Psychiatry and Neurology's 10 year recertification process

1. The man whose antidepressants stopped working; 2. The son who would not take a shower; 3. The man who kept hitting his wife over the head with a frying pan; 4. The son who could not go to bed; 5. The sleepy woman with anxiety; 6. The woman who felt numb; 7. The case of physician do not heal thyself; 8. The son whose parents were desperate to have him avoid Kraepelin; 9. The soldier who thinks he is a 'slacker' broken beyond all repair after 3 deployments to Iraq; 10. The young man everybody was afraid to treat; 11. The young woman whose doctors could not decide whether she has schizophrenia, bipolar disorder or both; 12. The scary man with only partial symptom control on clozapine; 13. The 8 year old girl who was naughty; 14. The scatter-brained mother whose daughter has ADHD, like mother, like daughter; 15. The doctor who couldn't keep up with his patients; 16. The computer analyst who thought the government would choke him to death; 17. The severely depressed man with a life insurance policy soon to lose its suicide exemption; 18. The anxious woman who was more afraid of her anxiety medications than of anything else; 19. The psychotic woman with delusions that no medication could fix; 20. The breast cancer survivor who couldn't remember how to cook; 21. The woman who has always been out of control; 22. The young man with depression and alcohol abuse - like father, like son, like grandfather, like father, like great grandfather, like grandfather; 23. The woman with psychotic depression responsive to her own TMS machine; 24. The boy getting kicked out of his classroom; 25. The young man whose dyskinesia was prompt and not tardive; 26. The patient whose daughter wouldn't give up; 27. The psychotic arsonist who burned his house and tried to burn himself; 28. The woman with depression whose Parkinson's Disease vanished; 29. The depressed man who thought he was out of options; 30. The woman who was either manic or fat; 31. The girl who couldn't find a doctor; 32. The man who wondered if once a bipolar always a bipolar?; 33. Suck it up, soldier, and quit whining; 34. The young man who is failing to launch; 35. The young cancer survivor with panic; 36. The man whose antipsychotic almost killed him; 37. The painful man who soaked up his opiates like a sponge; 38. The woman with an ever fluctuating mood; 39. The psychotic sex offender with grandiosity and mania; 40. The elderly man with schizophrenia and Alzheimer's Disease; Index.