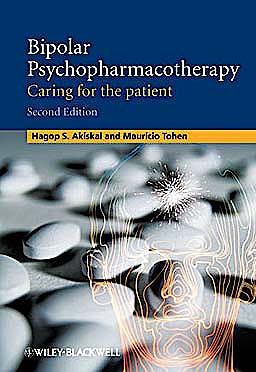 Bipolar Psychopharmacotherapy. Caring for the Patient

If a colleague were to ask me, “What would you recommend I read if I want to become a real expert on bipolarity?” I would respond ‘Bipolar Psychopharmacotherapy: Caring for the Patient’.” Journal of Bipolar Disorders.

And the second edition is even better! Bipolar Psychopharmacotherapy covers both pharmacotherapy and the supportive role of psychotherapy, psychoeducation and social approaches to provide a broad integrative philosophy of care for bipolar patients. Extensive coverage is given to special management issues such as the pharmacological care of women with bipolar disorder, children and the elderly, as well as bipolar depression and suicide prevention.

The mood swings that characterize bipolar disorder can now be better stabilized in most patients than in the past, but the illness must be carefully managed throughout a person’s life. Pharmacotherapy is central to the acute treatment and long-term management and as there are several classes of drugs which are often prescribed concurrently, treatment issues are complex. This essential reference work features critical reviews of the existing literature, plus information on new treatments that have been reported at peer reviewed scientific meetings, often written by the pioneering experts on a particular treatment. The second-generation antipsychotics are now covered in separate chapters to provide in-depth coverage of these agents. There are also new chapters on the pharmacological treatments of mixed states and rapid cycling and novel therapeutic vistas.

Hagop Akiskal is Distinguished Professor of Psychiatry and Director of the International Mood Center, San Diego Veterans Administration Medical Center, San Diego, California, USA. He was awarded the Jean Delay prize by the World Psychiatric Association in 2002 for research work that better bridges the gap between biological, psychological and social aspects of psychiatry and mental health. He has received the Gold Medal for Pioneer Research (Society of Biological Psychiatry), the German Anna Monika Prize for Depression, the NARSAD Prize for Affective Disorders, the French Jules Baillarger and the Italian Aretaeus Prizes for his research on the bipolar spectrum. He is Editor-in-Chief of the Journal of Affective Disorders.

Mauricio Tohen was appointed to the Krus endowed chair in Psychiatry at the University of Texas Health Science Centre at San Antonio in 2009. He is Chief of the Division of Mood and Anxiety Disorders, Department of Psychiatry, University of Texas Health Science Centre, San Antonio, Texas, USA. He is President of the International Society for Bipolar Disorders (2010 – 2012). His research has focused on the clinical epidemiology and psychopharmacological treatments of bipolar disorder. Professor Tohen has over 200 original publications and over 500 book chapters and scientific abstracts. He has co-edited Mood Disorders Across the Lifespan and Textbook of Psychiatric Epidemiology, and has also edited Comorbidity in Affective Disorders.