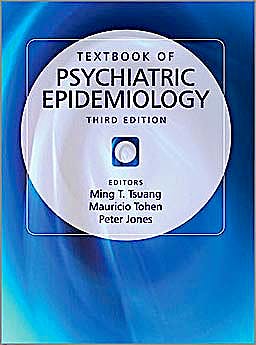 The new edition of this critically praised textbook continues to provide the most comprehensive overview of the concepts, methods, and research advances in the field; particularly the application of molecular genomics and of neuroimaging. It has been revised and enhanced to capitalize on the strengths of the first and second editions while keeping it up-to-date with the field of psychiatry and epidemiology. This comprehensive publication now includes chapters on experimental epidemiology, gene-environment interactions, the use of case registries, eating disorders, suicide, childhood disorders and immigrant populations, and the epidemiology of a number of childhood disorders.

As in the first and second editions, the objective is to provide a comprehensive, easy to understand overview of research methods for the non-specialist. The book is ideal for students of psychiatric epidemiology, psychiatric residents, general psychiatrists, and other mental health professionals.

The book features a new editor, Peter Jones, from the University of Cambridge, who joins the successful US team of Ming Tsuang and Mauricio Tohen.

Dr. Tsuang is Behavioral Genomics Endowed Chair and University Professor, University of California and Distinguished Professor of Psychiatry and Director, Center for Behavioral Genomics, Department of Psychiatry, University of California, San Diego. He also directs the Harvard Institute of Psychiatric Epidemiology and Genetics. He was Stanley Cobb Professor of Psychiatry and Chairman, Department of Psychiatry, Harvard Medical School at Massachusetts Mental Health Center, where he served as superintendent and president of Massachusetts Mental Health Institute of Psychiatry. He received his M.D. degree from National Taiwan University and his Ph.D. in Psychiatric Genetics and Doctor of Science in Genetics Epidemiology from the University of London. He has been recognized worldwide for his research in schizophrenia, manic-depressive illness and substance abuse.

He is a member of the Institute of Medicine, National Academy of Sciences, and served on the National Advisory Mental Health Council, U.S. Department of Health and Human Services. He has been elected Fellow of the American Psychiatric Association, American College of Psychiatrists, and British Royal Society of Psychiatrists, Fellow and former President of the American Psychopathological Association. He is a Council Member of the Taiwan National Health Research Institute, and Academician, Academia Sinica of Taiwan, the highest academic institution in Taiwan. He is currently the President of the International Society of Psychiatric Genetics.

He has authored or co-authored over 600 publications, including peer review journal papers, book chapters and books in the areas of psychiatric epidemiology and genetics, including major psychoses and substance abuse and spiritual health. In addition to serving on many editorial boards of scientific journals, he is currently the Senior Editor for Neuropsychiatric Genetics, a section of the American Journal of Medical Genetics.

Dr. Tohen obtained his MD degree from the National University of Mexico. He completed a residency in Psychiatry at the University of Toronto and a Fellowship in Psychopharmacology at McLean Hospital, Harvard Medical School. He obtained his doctorate in Epidemiology from the Harvard School of Public Health and an MBA from the University of Indiana. From 1988 to 1997 he was the clinical Director of the Bipolar and Psychotic Disorders Program at McLean Hospital. From 1997 to 2008 he worked at Lilly Research Laboratories in Indianapolis, Indiana where he reached the most senior scientific rank of Distinguished Lilly Scholar. In 2009 he was appointed to the Krus endowed chair in Psychiatry at the University of Texas Health Science Centre at San Antonio. His research has focused on the clinical epidemiology and psychopharmacological treatments of bipolar disorder. Professor Tohen has over 200 original publications and over 500 book chapters and scientific abstracts. He has co-edited Mood Disorders Across the Lifespan and Bipolar Psychopharmacology, and has also edited Comorbidity in Affective Disorders.

Professor Jones is Head of the Department of Psychiatry at the University of Cambridge. His particular clinical interest is in psychotic illness and asking questions about causes and treatment. His research concerns lifecourse influences on adult mental health and illness, and the interface between population-based and biological investigation and explanations.