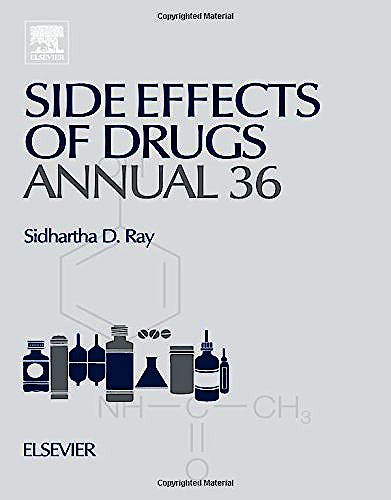 Side Effects of Drugs Annual 36

The Side Effects of Drugs Annual was first published in 1977. It has been continually published since then as a yearly update to the voluminous encyclopedia Meyler's Side Effects of Drugs. Each new Annual continues to provide clinicians and medical investigators with a reliable and critical yearly survey of new data and trends in the area of adverse drug reactions and interactions. An international team of specialists has contributed to the informative Annual by critically interpreting it and by pointing to whatever is misleading.

Dr. Sidhartha D. Ray serves as a Professor of Pharmaceutical Sciences and was the Founding chair of that department at Manchester University College of Pharmacy in Fort Wayne, Indiana, USA. Prior to joining Manchester University, Dr. Ray has served as Professor of Pharmaceutical Sciences for nearly two decades at the Arnold & Marie Schwartz College of Pharmacy and Health Sciences of Long Island University, New York. He is a teacher and a scholar, and teaches with passion such courses as mechanisms of drug action, molecular & cellular toxicology, toxic and side effects of drugs and chemicals, pathophysiology, medical microbiology and immunology. During his 31 years of academic experience in pharmacy teaching, research and service, Dr. Ray has consistently maintained a rigorous research program focusing on drug and chemical induced organ toxicology, adverse drug reaction mechanisms, side effects of a number of therapeutically relevant drugs and environmentally significant stressors. Over the last two decades, Dr. Ray’s seminal discoveries have provided clear understandings on the dynamic role of apoptosis and necrosis in drug-induced organ toxicity and have influenced the development of safety measures for a stunning variety of xenobiotics, phytochemicals and nutraceuticals. He is internationally recognized as a leader in the scientific community and was one of the front runners in exploring mechanisms of drug and chemical-induced programmed and un-programmed cell death in in-vivo models. His landmark studies on the interplay of bcl-2, bcl-xl, p53, bad and bax during acetaminophen induced cell death and its prevention by grape seed proanthocyanidin extract has earned worldwide citations. His peer recognition and acknowledged service contributions are reflected by his election into multiple international professional organizations, such as the Society of Toxicology (SOT), Society of Free Radical Biology & Medicine (SFRBM), American Society of Pharmacology & Experimental Therapeutics (ASPET), American Association of Colleges of Pharmacy (AACP) and American College of Nutrition (ACN). Dr. Ray is an Associate Editor of Encyclopedia of Toxicology (3rd Ed, Elsevier, 2014), and serves on the editorial boards of multiple prestigious international journals, including ‘Archives of Toxicology’, ‘Oxidative Medicine & Cellular Longevity’, ‘Journal of Pharmaceutical Sciences and Pharmacology’, ‘Journal of Toxicological Education’ and ‘Experimental & Clinical Sciences’. Based on his contributions to teaching, service and scholarship to health sciences in general, Dr. Ray received multiple prestigious awards, including the American Academy of Clinical Toxicology’s national research award (1996), ‘Fellow of the American College of Nutrition’ honor in 1999, David Newton Award for Excellence in Teaching Pharmacy (2005), the Biennial Abraham Krasnoff Memorial Award for Lifetime Scholarly Achievement (2008), Arnold & Marie Schwartz College of Pharmacy & Health Science’s ‘Wall-of-Fame’ honor (2011), the Society of Toxicology’s ‘Undergraduate Educator of the Year’ national award (2013), and the Manchester University’s ‘Outstanding Scholar of the Year’ award (2014). He currently serves on the SOT-NIH-NLM’s joint Toxlearn Project, SOT Undergraduate Task Force (2007 - present), and has previously served on the SOT’s Education Committee (2007 - 2010). In his lifetime, Dr. Ray has mentored research to numerous PharmD, MS, MD and PhD students in a number of areas of toxicology and biomedical sciences, made seminal contributions to the fields of pharmacology, toxicology, free radical biology, anticancer mechanism, phytochemicals, nutraceuticals & dietary supplements, and molecular safety sciences. Dr. Ray loves to promote ‘Lifelong Learning’ strategies to his students and clearly models his beliefs day in and day out. Visit URL: www.sidhartharay.com/ for m