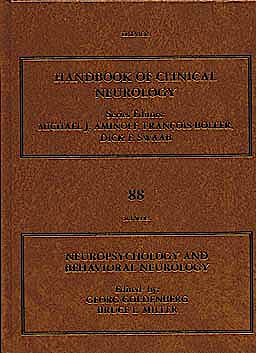 This is a volume in the Handbook of Clinical Neurology (Series Editors: Michael J. Aminoff, Department of Neurology, University of California, San Francisco, USA; Fran§ois Boller, Bethesda, USA; Dick F. Swaab, Netherlands Institute for Neuroscience, Amsterdam, the Netherlands) covering neuropsychology and behaviour. This volume concentrates on the three major developments that have helped shape the recent advances in this subject: the rise of interdisciplinary work in the cognitive neurosciences; the discovery and application of new tools to investigate neurochemical and neuroanatomical underpinnings of cognition; the wider and more focused use of neuropsychological testing in the charaterisation of neurodegenerative conditions. As well as chapters on the advances in the basic mechanisms there are also chapters addressed to the clinician on how to approach the neuropsychological process.