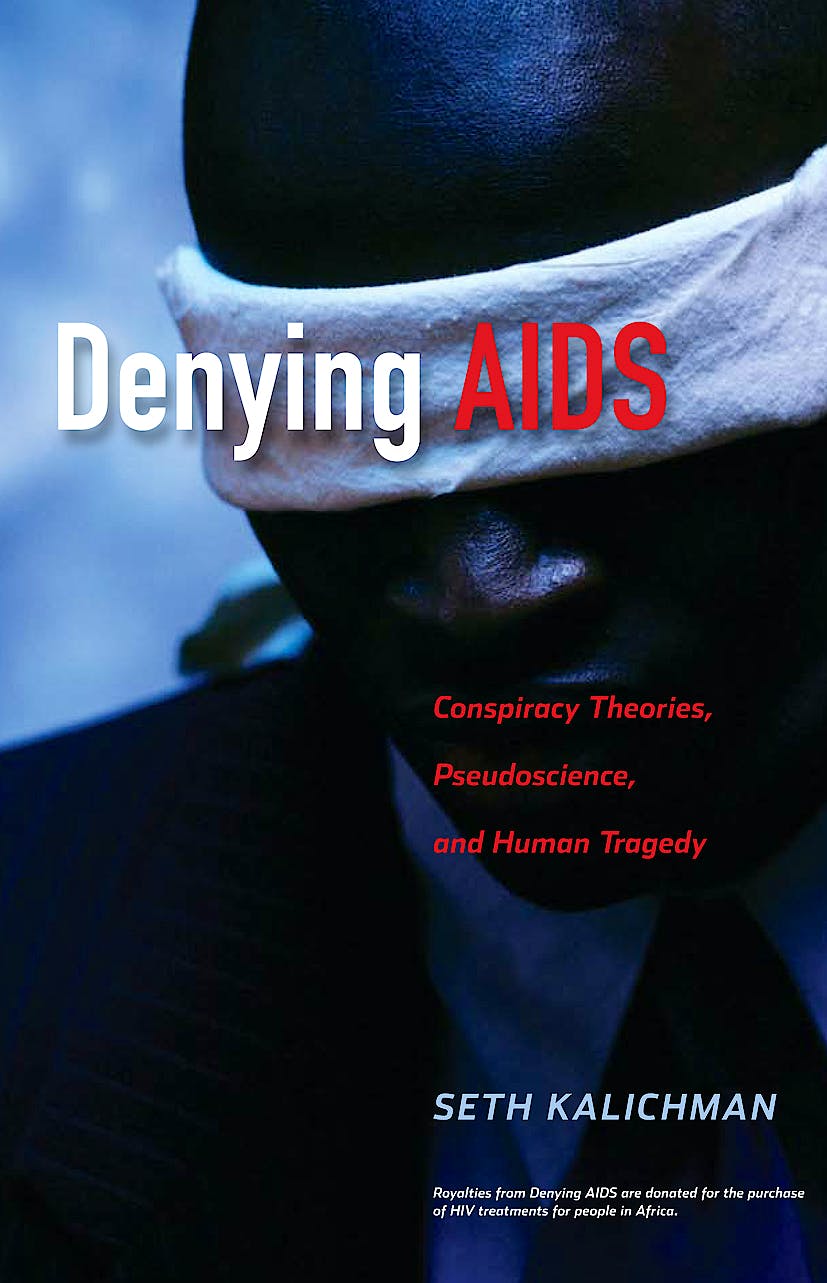 Paralleling the discovery of HIV and the rise of the AIDS pandemic, a flock of naysayers has dedicated itself to replacing genuine knowledge with destructive misinformation—and spreading from the fringe to the mainstream media and the think tank. Now, from the editor of the journal AIDS and Behavior, comes a bold exposé of the scientific and sociopolitical forces involved in this toxic evasion. Denying AIDS traces the origins of AIDS dissidents’ disclaimers during the earliest days of the epidemic and delves into the psychology and politics of the current denial movement in its various incarnations.

Seth Kalichman focuses not on the "difficult" or doubting patient, but on organized, widespread forms of denial (including the idea that HIV itself is a myth and HIV treatments are poison) and the junk science, faulty logic, conspiracy theories, and larger forces of homophobia and racism that fuel them. The malignant results of AIDS denial can be seen in those individuals who refuse to be tested, ignore their diagnoses, or reject the treatments that could save their lives. Instead of ignoring these currents, asserts Kalichman, science has a duty to counter them.

Among the topics covered:

For anyone affected by, interested in, or working with HIV/AIDS, and public health professionals in general, the insight and vision of Denying AIDS will inspire outrage, discussion, and ultimately action.

Written for: Anyone interested in AIDS as well as students, professionals in public health and researchers in HIV/AIDS

"Seth Kalichman has superbly captured the contradictions inherent in AIDS denialism. He has deftly captured its religious-like fervor, its vociferous proponents and passionate opponents as well as its destructive force when legitimized by the South African President. AIDS denialism has left confusion in its wake as it undermined public health efforts to curb the greatest health challenge of the 20th century. Kalichman vividly shares his experiences, understanding, and dilemmas as he unraveled this phenomenon piece by painful piece."

-Salim S. Abdool Karim, Member of the 2000 South African Presidential Panel on AIDS, Professor at University of KwaZulu-Natal, and Director of Centre for the AIDS Programme of Research in South Africa (CAPRISA)

"Significant advances in the prevention and treatment have lead to fewer numbers of new infections and extended and improved the lives of those affected by the global epidemic of HIV/AIDS. However, myths and misunderstandings about HIV/AIDS still abound and pose a real threat to our progress. In Denying AIDS, Seth Kalichman provides a fascinating look into the thinking of those who propagate AIDS myths and the negative impact it has on our response to a deadly disease. He shows us how AIDS pseudoscience has at times confused the public and threatened sound public health policy. Anyone who cares about the global HIV/AIDS pandemic should read this book."

-Helene D. Gayle, President and CEO CARE USA and former Director of the National Center for HIV, STD and TB Prevention, Centers for Disease Control and Prevention, Assistant Surgeon General, and Member of the 2000 South African Presidential Panel on AIDS

"Seth Kalichman is an excellent scientist passionately committed to saving lives through the prevention of HIV/AIDS. This excellent volume examines the detailed history of HIV/AIDS denialism as well as its damaging impact throughout the world. HIV/AIDS denialism and its proponents have created confusion when the clear provision of scientifically accurate communication was most needed. At all levels, denial of AIDS results in a failure to face up to one of the greatest health threats of the century."

-James Curran, Dean of the Rollins School of Public Health at Emory University, Coordinator of the 1981 Centers for Disease Control and Prevention "Task Force on Kaposi’s Sarcoma and Opportunistic Infections" and former Director of the CDC HIV/AIDS Division.

"AIDS denialism is destructive and rides on the back of mistrust in science and medicine through our internet world. Seth Kalichman brilliantly uses a psychological lens to expose the wacky world that creates and maintains its presence despite the untold numbers of deaths and suffering it has caused. The book is a wake up call to policy makers and scientists, particularly in places most affected by the pandemic, that denialism must be confronted if we want to bring it under control. A must read for those who want to know more about the power and influence of pseudoscience."