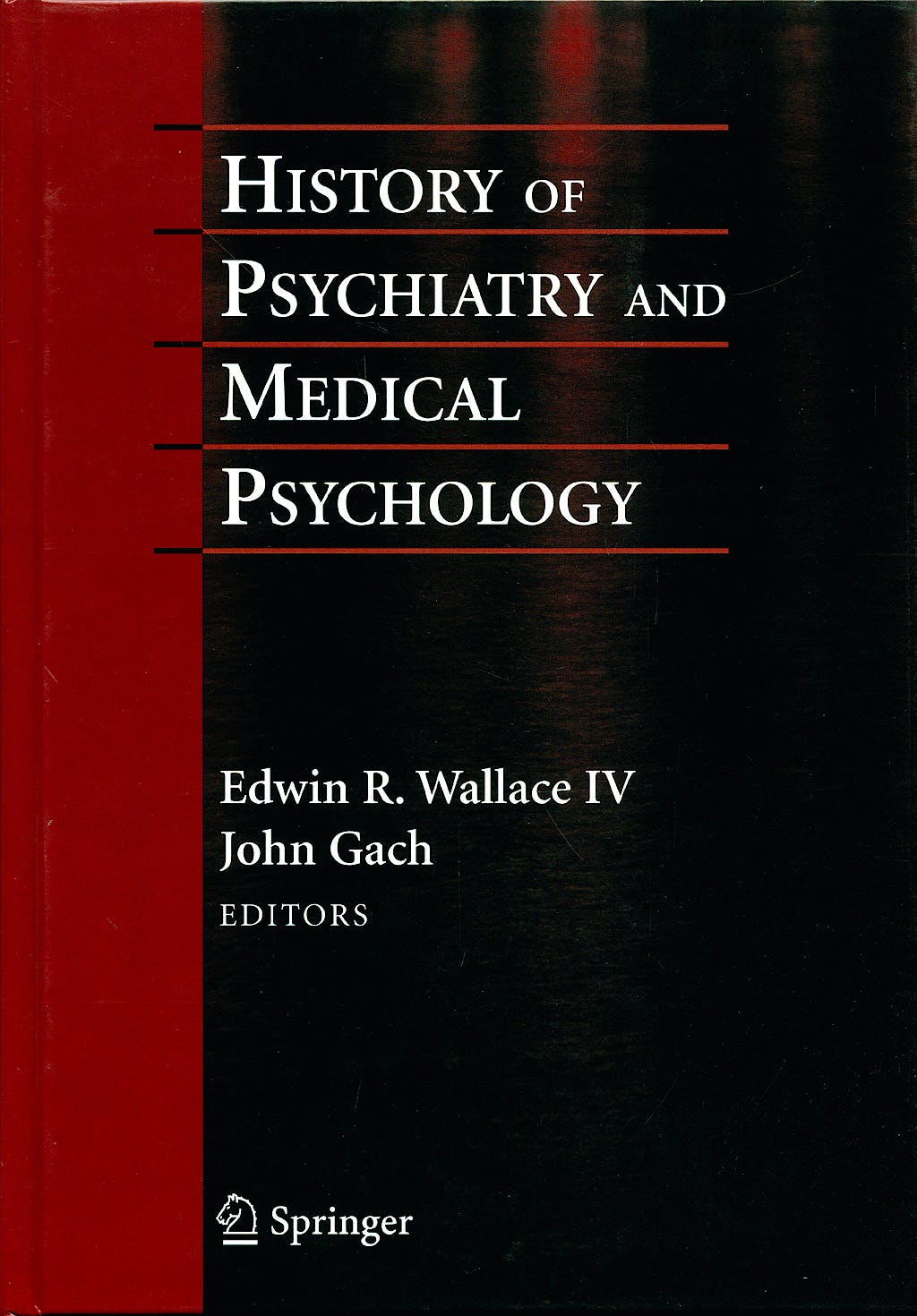 History of Psychiatry and Medical Psychology

The first English-language comprehensive reference on the history of psychiatry since 1966.

The Romans knew that Nero was insane. Shakespeare’s Macbeth asked his doctor to treat "a mind diseased." The people of the European Enlightenment era pondered whether the asylum inmates were mad or simply bad.

As a discipline, psychiatry has always walked a fine if not easily defined line between social and biological science. History of Psychiatry and Medical Psychology traces this evolution in its social, political, and philosophical contexts, charting the rise of psychology as a legitimate field of scientific pursuit, and of psychiatry as a medical specialty. An interdisciplinary team of noted historians (including Sander Gilman, Dora Weiner, Hannah Decker, and the recently deceased dean of American psychiatric history, George Mora) has distilled centuries of history—protracted debates, false starts, and missteps included—resulting in an engaging and inspiring narrative of history and methodology in the making. Highlights include:

Its wide scope, divergent viewpoints, and insistence on viewing historical periods through their own lenses and not our own makes this History a must-have reference for scholars of psychiatry, psychology, and medicine. At the same time, it is accessible enough for the lay reader with some background in the field.

Written for: Researchers and scholars of psychology, psychiatry, medical sociology and history of medicine

Contents.- Acknowledgments.- Preface.- Introduction: Synopsis and Overview.- Contributors.- Section One: Prolegomenon.- Chapter 1. Historiography: Philosophy and Methodology of History, with Special Emphasis on Medicine and Psychiatry; and an Appendix on ‘Historiography’ as the History of History.- Chapter 2. Contextualizing the History of Psychiatry: Annotated Bibliography and Essays: Addenda A-F.- Section Two: Periods.- Proto-Psychiatry.- Chapter 3. Mind and Madness in Classical Antiquity.- Chapter 4. Mental Disturbances, Unusual Mental States, and Their Interpretation during the Middle Ages.- Chapter 5. Renaissance Conceptions and Treatments of Madness.- Chapter 6. The Madman in the Light of Reason, Enlightenment Psychiatry: Part I. Custody, Therapy, Theory, and the Need for Reform.- The Growth of Psychiatry as a Medical Specialty.- Chapter 7. Part II Alienists, Treatises, and the Psychologic Approach in the Era of Pinel.- Chapter 8. Philippe Pinel in the 21st Century: The Myth and the Message.- Chapter 9. German Romantic Psychiatry: Part I. Earlier, Including More-Psychological Orientations.- Chapter 10. German Romantic Psychiatry: Part II. Later, Including More-Somatic Orientations.- Chapter 11. Descriptive Psychiatry and Psychiatric Nosology during the Nineteenth Century.- Chapter 12. Biological Psychiatry in the Nineteenth and Twentieth Centuries.- Chapter 13. The Intersection of Psychopharmacology and Psychiatry in the Second Half of the Twentieth Century.- Section Three: Concepts and Topics.- Concepts.- Chapter 14. A History of Melancholia and Depression.- Chapter 15. Constructing Schizophrenia as a Category of Mental Illness.- Chapter 16. The Concept of Psychosomatic Medicine.- Topics.- Chapter 17. Neurology’s Influence on American Psychiatry: 1865-1915.- Chapter 18. The Transformation of American Psychiatry: From Institution To Community, 1800-1950.- Chapter 19. The Transition to Secular Psychotherapy: Hypnosis and the Paradigm of Alternate Consciousness.- Chapter 20. Psychoanalysis in Central Europe: The Interplay of Psychoanalysis And Culture.- Chapter 21. The Psychoanalytic Movement in the United States, 1906-1991.- Chapter 22. The Development of Clinical Psychology, Social Work, and Psychiatric Nursing: 1900-1980’s.- Epilogue: Psychiatry and the Mind-Body Relation.- Chapter 23. Thoughts Toward a Critique of Biological Psychiatry.- Chapter 24. Two "Mind"-"Body" Models for a Holistic Psychiatry.- Chapter 25. Freud on "Mind"-"Body" I. The Neurobiological and "Instinctualist" Stance; with Implications for Chapter 24, and with Two Postscripts.- Chapter 26. Freud on "Mind"-"Body" II: Drive, Motivation, Meaning, History, and Freud’s Psychological Heuristic; with Clinical and Everyday Examples.- Chapter 27. Psychosomatic Medicine and the Mind-Body Relation: Philosophical, Scientific, and Clinical Perspectives

"The main audience for this new book is educators who want to be good scholars of intellectual history; the remaining readers are those who just want to deeply understand how present concepts of the mind were invented. This book, written ill a language of a high but approachable erudition, could serve as a knowledgeable guide to all of them in their journeys to a different level of understanding about how psychiatry actually works and thinks as a discipline. ... I enthusiastically recommend History of Psychiatry and Medical Psychology-it is refreshingly self-aware, an enjoyable read, and could provide hours of material for seminars with students to remind them of Santayana's mordant warning that those who cannot remember the past are condemned to repeat it." (Antolin C. Trinidad, MD, George Washington University, Washington, DC, JAMA, February 18, 2009-Vo1. 301, No. 7)

"It devotes a substantial amount of space to a prolegomenon; an introductory chapter to the historical and methodological concerns, and adds an extremely useful and comprehensive annotated bibliography. … would be worthy of publication in its own right, and its value is all the greater for the way in way in which it contextualizes the rest of the book. … It places the philosophy of psychiatry centrally in both the practice and academic worlds … . It is a very fine book." (Mark Welch, Metapsychology Online Reviews, September, 2009)