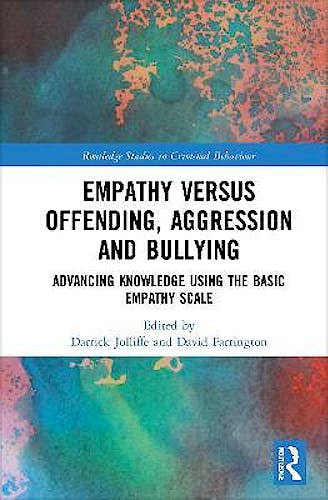 Part I. The Basic Empathy Scale and Parenting

Empathy versus Offending, Aggression, and Bullying advances knowledge about the measurement of empathy, using the Basic Empathy Scale (BES), and how empathy is related to offending, aggression, and bullying in community and incarcerated groups.

Empathy is widely accepted as one of the most important individual factors that are related to offending, aggression, and bullying, and it is common in many intervention projects to aim to improve empathy in order to reduce offending, aggression, and bullying. The BES was constructed by Jolliffe and Farrington (2006) and has been widely used in a number of countries. This book brings together chapters, from a broad range of contributors, which explore the application of BES in ten different countries (England, Portugal, Spain, Poland, Italy, the Netherlands, Croatia, Australia, Canada, and the USA). Each chapter reviews the use of the BES in that particular jurisdiction, its psychometric properties, and its importance in relation to offending, aggression, and bullying. The research includes samples from primary schools, secondary schools, and the community, as well as those who are justice-involved and on probation, in prisons and secure psychiatric hospitals. The book concludes with wider implications for intervention, policy, and practice.

This book will be valuable reading for students and scholars of criminology, psychology and sociology, as well as practitioners who are interested in developing their understanding of the complex link between empathy and a range of antisocial behaviours.

Darrick Jolliffe is Professor of Criminology and Head of the School of Law and Criminology at the University of Greenwich. He has published extensively in the areas of empathy, individual differences and offending, developmental life-course criminology, punishment and offending, and has conducted numerous research studies for National and International Government Agencies.

David P. Farrington, O.B.E., is Emeritus Professor of Psychological Criminology at Cambridge University. He has received the Stockholm Prize in Criminology and he has been President of the American Society of Criminology. His major research interest is in developmental criminology, and he is Director of the Cambridge Study in Delinquent Development, which is a prospective longitudinal survey of over 400 London males from age 8 to age 61. In addition to 850 published journal articles and book chapters on criminological and psychological topics, he has published 115 books, monographs, and government publications, and 161 shorter publications.