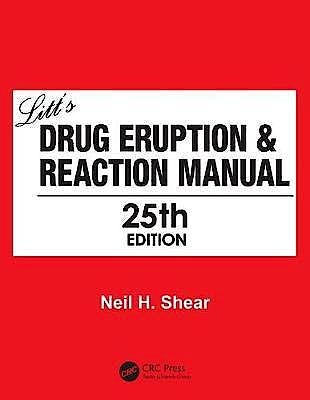 Internationally relied upon by medical practitioners for its unparalleled focus on adverse effects and cutaneous reactions, this is a succinct clinical reference and essential drug-safety tool for patient care. The new edition features further tables of reactions known to be caused by classes of drugs, with additional genetic data.

Neil Shear, MD, FRCPC, is Head of Dermatology at Sunnybrook & Women’s College Health Sciences Centre and Director of the University of Toronto Drug Safety Research Group. He founded the Drug Safety Clinic at Sunnybrook in 1985 and was the founding chair of the Canadian Adverse Drug Reaction Advisory Committee (CADRAC) of Health Canada.

There are a few books that I rely on every day to provide optimal care to my patients and Litt’s Drug Eruption & Reaction Manual is certainly one of them. Various editions of the book have held prominent and easily accessible places on my bookshelf for decades.

Often the first hint of an association between a drug and a cutaneous finding appeared in this book before mainstream publications picked it up. And, when I see a patient with a rash that is potentially drug-related – like bullous pemphigoid – the Litt manual has comprehensive lists of all the drugs associated with various dermatologic disease patterns. Since Neil Shear, one of the world’s leading authorities on drug reactions, has taken on the duties of editor, I expect this exceptional book to be even better!