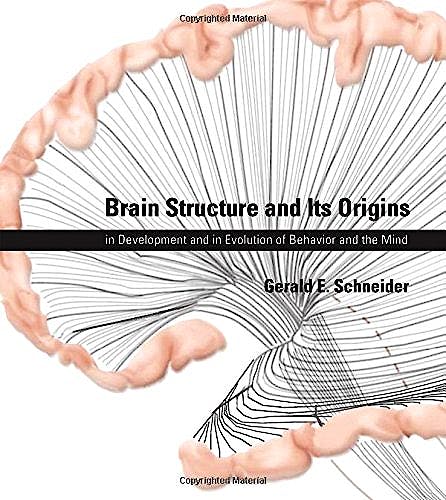 Brain Structure and Its Origins: In Development and in Evolution of Behavior and the Mind

This introduction to the structure of the central nervous system demonstrates that the best way to learn how the brain is put together is to understand something about why. It explains why the brain is put together as it is by describing basic functions and key aspects of its evolution and development. This approach makes the structure of the brain and spinal cord more comprehensible as well as more interesting and memorable. The book offers a detailed outline of the neuroanatomy of vertebrates, especially mammals, that equips students for further explorations of the field.

Gaining familiarity with neuroanatomy requires multiple exposures to the material with many incremental additions and reviews. Thus the early chapters of this book tell the story of the brain’s origins in a first run-through of the entire system; this is followed by other such surveys in succeeding chapters, each from a different angle. The book proceeds from basic aspects of nerve cells and their physiology to the evolutionary beginnings of the nervous system to differentiation and development, motor and sensory systems, and the structure and function of the main parts of the brain. Along the way, it makes enlightening connections to evolutionary history and individual development. Brain Structure and Its Origins can be used for advanced undergraduate or beginning graduate classes in neuroscience, biology, psychology, and related fields, or as a reference for researchers and others who want to know more about the brain.

PART II: THE CENTRAL NERVOUS SYSTEM, FROM INITIAL STEPS TO ADVANCED CHORDATES
3 Evolution of Multicellular Organisms with Neuron-Based Coordination
4 Expansions of the Neuronal Apparatus of Success

PART III: INTRODUCTION TO CONNECTION PATTERNS AND SPECIALIZATIONS IN THE EVOLVING CNS
5 The Ancestors of Mammals: Sketch of a Pre-mammalian Brain
6 Some Specializations Involving Head Receptors and Brain Expansions
7 The Components of the Forebrain Including the Specialty of the Mammals: The Neocortex

PART IV: DEVELOPMENT AND DIFFERENTIATION: SPINAL LEVEL
8 The Neural Tube Forms in the Embryo, and CNS Development Begins
9 The Lower Levels of Background Support: Spinal Cord and the Innervation of the Viscera

PART V: DIFFERENTIATION OF THE BRAIN VESICLES
10 Hindbrain Organization, Specializations, and Distortions
11 Why a Midbrain? Notes on Evolution, Structure, and Functions
12 Picturing the Forebrain with a Focus on Mammals
13 Growth of the Great Networks of Nervous Systems

PART IX: THE FOREBRAIN AND ITS ADAPTIVE PRIZES: A SNAPSHOT
24 Forebrain Origins: From Primitive Appendage to Modern Dominance

PART X: THE HYPOTHALAMUS AND LIMBIC SYSTEM
25 Regulating the Internal Milieu and the Basic Instincts
26 Core Pathways of the Limbic System, with Memory for Meaningful Places
27 Hormones and the Shaping of Brain Structures
28 The Medial Pallium Becomes the Hippocampus
29 The Limbic Striatum and Its Outpost in the Temporal Lobe

Gerald E. Schneider is Professor of Neuroscience in the Department of Brain and Cognitive Sciences at MIT.