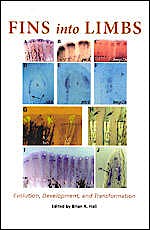 Long ago, fish fins evolved into the limbs of land vertebrates and tetrapods. During this transition, some elements of the fin were carried over while new features developed. Lizard limbs, bird wings, and human arms and legs are therefore all evolutionary modifications of the original tetrapod limb.

A comprehensive look at the current state of research on fin and limb evolution and development, this volume addresses a wide range of subjects—including growth, structure, maintenance, function, and regeneration. Divided into sections on evolution, development, and transformations, the book begins with a historical introduction to the study of fins and limbs and goes on to consider the evolution of limbs into wings as well as adaptations associated with specialized modes of life, such as digging and burrowing. Fins into Limbs also discusses occasions when evolution appears to have been reversed—in whales, for example, whose front limbs became flippers when they reverted to the water—as well as situations in which limbs are lost, such as in snakes.

With contributions from world-renowned researchers, Fins into Limbs will be a font for further investigations in the changing field of evolutionary developmental biology.

Fins into Limbs is an exploration of a longstanding evolutionary puzzle associated with the origin of tetrapods and the vertebrate invasion of land. Brian Hall has assembled a stellar array of contributors from various fields that represent the pieces necessary for a solution. The volume is handsomely executed and also timely. It collects a diverse body of recent research on fins and limbs emerging from evolutionary developmental biology (evo-devo), functional morphology, and paleontology, all of which have transformed our conception of what the fin-limb transition looked like....Fins into Limbs serves as a necessary reference and a worthy guide to future research on this and other evolutionary transitions. It tells us what we know, what we don't know, and what we'd really like to know. Thus it points us in the direction of which pieces are required to solve the puzzle and reminds us of the pressing need to figure out how they all fit together.

2. Skeletal Changes in the Transition from Fins to Limbs
Michael I. Coates and Marcello Ruta

3. A Historical Perspective on the Study of Animal Locomotion with Fins and Limbs
Eliot G. Drucker and Adam P. Summers

5. The Development of Fins and Limbs
Mikiko Tanaka and Cheryl Tickle

6. Mechanisms of Chondrogenesis and Osteogenesis in Fins
P. Eckhard Witten and Ann Huysseune

7. Mechanisms of Chondrogenesis and Osteogenesis in Limbs
Scott D. Weatherbee and Lee A. Niswander

13. Evolution of the Appendicular Skeleton of Amphibians
Robert L. Carroll and Robert B. Holmes

18. Aquatic Adaptations in the Limbs of Amniotes
J. G. M. Thewissen and Michael A. Taylor