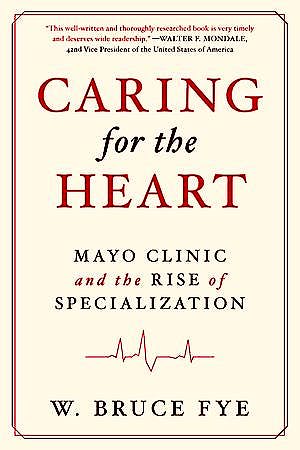 Caring for the Heart. Mayo Clinic and the Rise of Specialization

This groundbreaking book weaves together three important themes. It describes major developments in the diagnosis and treatment of heart disease in the twentieth century, explains how the Mayo Clinic evolved from a family practice in Minnesota into one of the world's leading medical centers, and reveals how the invention of new technologies and procedures promoted specialization among physicians and surgeons.

Caring for the Heart is written for general readers as well as health care professionals, historians, and policy analysts. Unlike traditional institutional or disease-focused histories, this book places individuals and events in national and international contexts that emphasize the interplay of medical, scientific, technological, social, political, and economic forces that have resulted in contemporary heart care. Patient stories and media perspectives are included throughout to help general readers understand the medical and technological developments that are described.

The book is a synthetic study, but it is written so that readers may pick and choose the chapters of most interest to them. Another feature of the book is that readers may follow the stories without looking at the notes. Those who are interested in delving deeper into the main topics will find a wealth of carefully chosen references that offer greater detail and additional perspectives. The descriptions and interpretations that fill the book benefit from the fact that the author has been a practicing cardiologist and medical historian for almost four decades.

This is mainly a twentieth-century story, but it begins earlier—before physicians who were identified as cardiologists, a time when medical specialization was just emerging in America. The final chapter, which addresses present-day concerns about health care costs, counterbalances earlier ones that might be read as celebrations of new technologies.

List of Figures and Tables
Foreword by Rosemary A. Stevens
Preface (with Acknowledgements)
Introduction

Section One: Inventing the Mayo Clinic and Cardiology
Chapter 1 The Nineteenth-Century Origins of the Mayo Practice
Chapter 2 The Mayos' Invention of Multispecialty Group Practice
Chapter 3 The Development of an Academic Medical Center in Rochester
Chapter 4 Patient Care and Clinical Research in the 1920s
Chapter 5 The Electrocardiograph and the Birth of Cardiology
Chapter 6 Challenges and Changes during the Depression