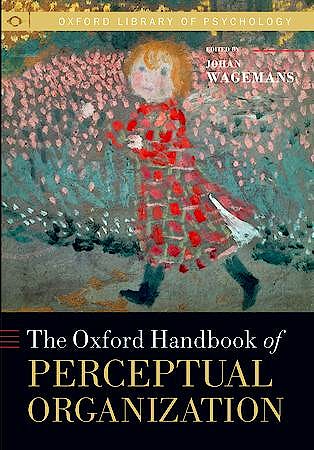 The Oxford Handbook of Perceptual Organization

Perceptual organization comprises a wide range of processes such as perceptual grouping, figure-ground organization, filling-in, completion, perceptual switching, etc. Such processes are most notable in the context of shape perception but they also play a role in texture perception, lightness perception, color perception, motion perception, depth perception, etc. Perceptual organization deals with a variety of perceptual phenomena of central interest, studied from many different perspectives, including psychophysics, experimental psychology, neuropsychology, neuroimaging, neurophysiology, and computational modeling. Given its central importance in phenomenal experience, perceptual organization has also figured prominently in classic Gestalt writings on the topic, touching upon deep philosophical issues regarding mind-brain relationships and consciousness. In addition, it attracts a great deal of interest from people working in applied areas like visual art, design, architecture, music, and so forth.

The Oxford Handbook of Perceptual Organization provides a broad and extensive review of the current literature, written in an accessible form for scholars and students. With chapter written by leading researchers in the field, this is the state-of-the-art reference work on this topic, and will be so for many years to come.

Johan Wagemans has a BA in psychology and philosophy, an MSc and a PhD in experimental psychology, all from the University of Leuven, where he is currently a full professor. Current research interests are mainly in so-called mid-level vision (perceptual grouping, figure-ground organization, depth and shape perception) but stretching out to low-level vision (contrast detection and discrimination) and high-level vision (object recognition and categorization), including applications in autism, arts, and sports. He is supervising a long-term research program aimed at reintegrating Gestalt psychology into contemporary vision science and neuroscience (see www.gestaltrevision.be) He is chief-editor of Perception, i-Perception and Art & Perception.