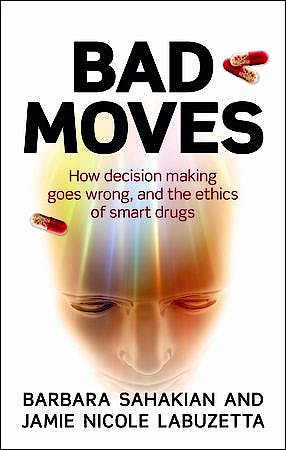 Bad Moves. How Decision Making Goes Wrong, and the Ethics of Smart Drugs

Making decisions is such a regular activity that it is mostly taken for granted. However, damage or abnormality in the areas of the brain involved in decision-making can severely affect personality and the ability to manage even simple tasks.

Here, Barbara Sahakian and Jamie Nicole LaBuzetta discuss the process of normal decision making - our strategies for making decisions, biases that affect us, and influential factors - and then describe the abnormal patterns found in patients with conditions such as severe depression, Alzheimer's, and accidental brain damage.

Using striking examples and case studies from their own research to show the impact of abnormal decision making, they introduce the concept of 'hot' and 'cold' decision making based on the level of emotions involved, showing that in various psychiatric conditions extreme emotions alter the pattern of decision making.

Looking at the ways in which the brain can be manipulated to improve cognitive function in these patients, they consider the use of 'smart drugs' that alleviate these problems. The realization that smart drugs can improve cognitive abilities in healthy people has led to growing general use, with drugs easily available via the Internet. They raise ethical questions about the availability of these drugs for cognitive enhancement, in the hope of informing public debate about an increasingly important issue.

Readership: General popular science readers interested in neuroscience, the science of decision making, and the issue of 'smart drugs'