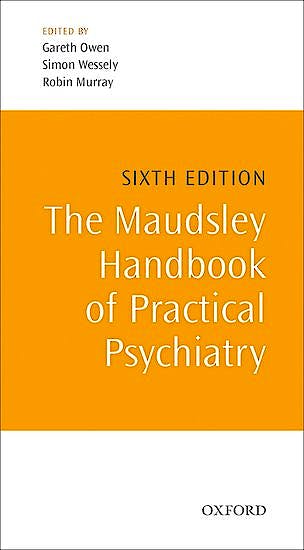 The Maudsley Handbook of Practical Psychiatry

The Maudsley Handbook of Practical Psychiatry has long served trainees in psychiatry, presenting them with practical and essential advice. This new edition of the orange book provides guidance on the psychiatric and neuropsychiatric examination andinterviewing of adults and childrennot just as a central skill, but as the basis for reaching a diagnosis, formulation and defining a treatment plan.

It covers special interview situations, such as dealing with specific patient reactions, and other special problems, for example, conducting a complicated assessment in cases of self-harm. The book concludes with important legal issues and is supported byhelpful appendices for ready-reference.

As with previous editions, this sixth edition has been revised and rewritten with the full and active involvement of a group of consultant psychiatrists and trainees, making it a highly relevant and practical handbook for all psychiatrists whether learning orrefreshing their skills.

Dr Gareth Owen studied philosophy and physics before starting medicine at the Royal Free and University College Medical School, qualifying in 1999. He subsequently trained in general medicine and clinical neuroscience at Addenbrooke's Hospital, Cambridge, before starting clinical and research training in psychiatry at the Maudsley Hospital and Institute of Psychiatry in 2002. He is a clinical senior lecturer at King's College London and holds a Wellcome Trust University Award to do research in mental health law and ethics. He works as a consultant psychiatrist in the Lambeth Home Treatment Team for the South London and Maudsley NHS Foundation Trust.

Simon Wessely is Professor and Head of the Department of Psychological Medicine, King's College London and the President of Royal College of Psychiatrists. He is a Consultant Liaison Psychiatrist at King's College and the Maudsley Hospitals. Hisdoctorate is in epidemiology, and he has over 700 original publications, with an emphasis on the boundaries of medicine and psychiatry, unexplained symptoms and syndromes, population reactions to adversity, military health, epidemiology and others. He has co-authored books on chronic fatigue syndrome, randomised controlled trials and a history of military psychiatry.

Robin Murray is Professor of Psychiatric Research at the Institute of Psychiatry, King's College and indeed has spent most of his working life there apart from one year at NIMH in the USA. His particular interest is in psychosis, and he and his colleagueshave contributed to the understanding that environmental factors such as obstetric events, drug abuse and social adversity dysregulate striatal dopamine and thus increase the risk of schizophrenia-like psychoses; he is currently most interested in gene-environmental interactions. He is also involved in testing new treatments for psychotic illnesses, and cares for people with psychosis at the South London and Maudsley NHS Trust. He has written over 700 articles, not all of them boring! He is the mostfrequently cited schizophrenia researcher outside the USA, has supervised 52 PhDs and 40 of his students have become full professors. He was elected a Fellow of the Royal Society in 2010 and received a knighthood in 2011.