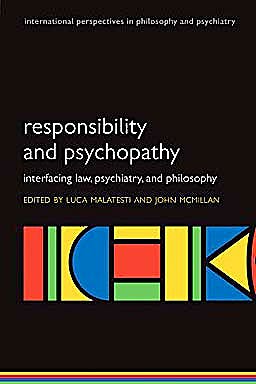 Psychopaths have emotional and rational impairments that can be expressed in persistent criminal behaviour. UK and US law has not traditionally excused disordered individuals for their crimes citing these impairments as a cause for their criminal behaviour. Until now, the discussion of whether psychopaths are morally responsible for their behaviour has usually taken place in the realm of philosophy. However, in recent years, this debate has been informed by scientific and psychiatric advancements, fundamentally so with the development of Robert Hare's diagnostic tool, the Psychopathy Checklist.
Responsibility and Psychopathy explores the moral responsibility of psychopaths. It engages with problems at the interface between law, psychiatry, and philosophy, and is divided into three parts offering relevant interdisciplinary background information to address this main problem. The first part discusses the public policy and legal responses to psychopathy. It offers an introduction to the central practical issue of how public policy should respond to psychopathy, providing insights for those arguing about the responsibility of psychopaths. The second part introduces recent scientific advancements in the classification, description, explanation, and treatment of psychopathy. The third part of the volume includes chapters covering the most significant dimensions of philosophical debate on the moral and criminal responsibility of psychopaths.
Exploring one of the most contentious topics of our time, this book will be fascinating reading for psychiatrists, philosophers, criminologists, and lawyers.