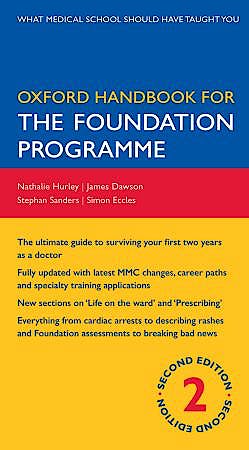 Oxford Handbook for the Foundation Programme

This is the ultimate guide to surviving your first two years as a doctor. Buying this book is a rite of passage for a junior doctor, a bit like getting the bleep for the first time except you won't grow to hate it. It covers all the essential knowledge including on-call emergencies, day-to-day ward life, clerking patients, referrals, procedures and interpreting results. Don't go on-call without it!

Better still this book will help you get your next job. It has practical tips on the new career system, MMC, completing your portfolio, interviews, application forms and getting published.

This new edition has been thoroughly updated in light of the MMC changes to medical training and advances in clinical practice. There are also numerous new sections including life on the ward and prescribing - two of the biggest challenges that new doctors face.

Stephan Sanders qualified from Nottingham Medical School in 2003 and trained as a paediatrician. He recently moved to work as a postdoctoral researcher at Yale University and hopes to train as a clinical geneticist. He also works as an expedition doctor and took part in the Serious Andes and Serious Ocean expeditions with Children's BBC. He first became interested in medical writing whilst at university and wrote the Crash Course Endocrine and Reproductive System. During his house officer year he was surprised by how little teaching was offered on the practical side of being a doctor; he wrote the Oxford Handbook of the Foundation Programme with this in mind, hoping to make life a bit easier for newly qualified doctors and their patients.

After graduating from Sussex in Biochemistry with Neurobiology, James found that research was not his bag and embarked upon a medical degree in Leicester. It was during his undergraduate medical training that James became involved with publishing after contacting a publisher after being frustrated at the number of mistakes in one of his physiology books. During his final year he was asked to write his first book on undergraduate pharmacology. Having been exposed to many teachers and numerous textbooks, both good and bad, James appreciates that learning can be difficult and frustrating, and endeavours to simplify education at any opportunity. James had a broad post-graduate education and initially trained towards a career in Emergency Medicine, though after passing these membership examinations decided he wanted to be an anaesthetist. James is now happily based in theatres, being an active participant and critic in that field

Simon Eccles is a Consultant in Emergency Medicine at the Homerton Hospital in Hackney, North East London. He was appointed as Clinical Director for NHS Connecting for Health in July 2007, having started as the joint National Clinical Lead for Hospital Doctors at the end of 2004. He is a past-Chairman of the Junior Doctors Committee of the BMA. In October 2004, he took a year out of clinical work to allow him to work on the 'Hospital at Night' project as the medical advisor to the Department of Health. He continues to work as a medical advisor to NHS National Workforce Projects.

Nathalie qualified from the University of Manchester in 2006 and entered the Foundation Programme in only its second established year. Her first two years as a doctor are being spent training at Macclesfield District General Hospital before she plans to embark on a career in general practice with a special interest in palliative care. The Oxford Handbook for the Foundation Programme is Nathalie's first experience with medical writing. She was very keen to get involved as she managed to pass her finals largely thanks to the Oxford Handbook series and is still frequently one of those doctors who stands there thinking 'What on earth do I do now?'.

"The real gems in this book are in the clinical presentations section, where management is arranged according to presenting complaint rather than by condition...a book...pitched at the right level for a junior doctor." - British Journal of Hospital Medicine