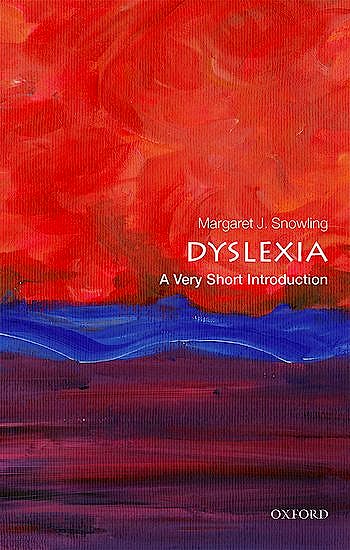 Preface
1: Does dyslexia exist?
2: What is dyslexia?
3: What role do genetic and environmental factors play in developing dyslexia?
4: What causes dyslexia
5: What do we know about the dyslexic brain?
6: What works for dyslexia?
7: Conclusions
Further reading
Index

Since dyslexia was first described in the British Medical Journal in 1896, there has been debate about the definitions and diagnostic procedures used, with some casting doubt on its very existence. However, there is now a considerable body of research regarding the nature and characteristics of this relatively common learning disorder. The contemporary view of dyslexia has emerged from a century of research in medicine, psychology and more recently neuroscience, and we now understand enough about this learning disorder to guide policy and practice.

This Very Short Introduction provides an accessible overview of this exciting field of research, beginning with its history, and drawing on testimony from people living with dyslexia. Considering the potential causes of dyslexia, and looking at both genetic and environment factors, Margaret Snowling shows how cross-linguistic studies have documented the prevalence of dyslexia in different languages. Discussing the various brain scanning techniques that have been used to find out if the brains of people with dyslexia differ in structure or function from those of typical readers, Snowling moves on to weigh up various strategies and interventions which can help people living with dyslexia today.

ABOUT THE SERIES: The Very Short Introductions series from Oxford University Press contains hundreds of titles in almost every subject area. These pocket-sized books are the perfect way to get ahead in a new subject quickly. Our expert authors combine facts, analysis, perspective, new ideas, and enthusiasm to make interesting and challenging topics highly readable.

Margaret J. Snowling CBE is Professor in the Department of Experimental Psychology at the University of Oxford and President of St. John's College. Her research focuses on children's language and learning; specifically the nature and causes of children's reading difficulties and how best to ameliorate them. She is also professionally qualified as a clinical psychologist, and has written and edited several books, including Dyslexia: A Cognitive-developmental Perpective (Wiley-Blackwell, 1997) and The Science of Reading: A Handbook (Wiley-Blackwell, 2005). She is Fellow of the British Academy, Fellow of the Academy of Medical Sciences, and Fellow of the Academy of Social Sciences, and was appointed CBE for services to science and the understanding of dyslexia in 2016.