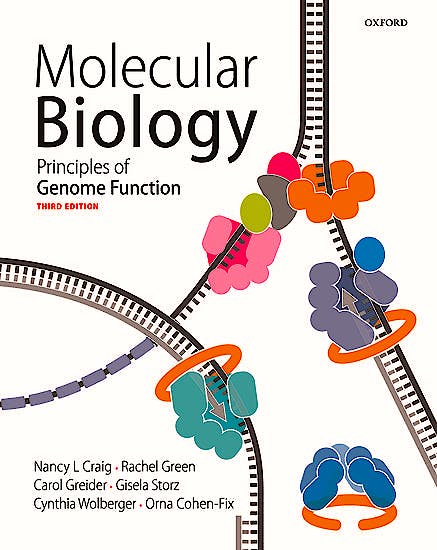 The biological world operates on a multitude of scales--from molecules to cells to tissues to organisms to ecosystems. Throughout all these levels runs a common thread: the communication and onward passage of information--from cell to cell, from organism to organism and, ultimately, from generation to generation. But how does this information--no more than a static repository of data--come alive to govern the processes that constitute life?

The answer lies in the concerted action of molecular components which cooperate through a series of carefully regulated processes to bring the information in our genome to life. These components and processes lie at the heart of one of the most fascinating subjects to engage the minds of scientists today: molecular biology.

Molecular Biology: Principles of Genome Function offers a fresh, distinctive approach to the teaching of molecular biology. It is an approach that reflects the challenge of teaching a subject that is in many ways unrecognizable from the molecular biology of the 20th century--a discipline in which our understanding has advanced immeasurably, but about which many questions remain to be answered.

It is written with several guiding themes in mind:

Molecular Biology responds to this challenge with Experimental Approach panels, which branch off from the text in a clearly-signposted way. These panels describe pieces of research that have been undertaken, and which have been particularly valuable in elucidating different aspects of molecular biology. Each panel is carefully cross-referenced to the discussion of key molecular biology tools and techniques, which are presented in a dedicated chapter at the end of the book.

Among the students being taught today are the molecular biologists of tomorrow; these individuals will be in a position to ask fascinating questions about fields whose complexity and sophistication become more apparent with each year that passes. Molecular Biology: Principles of Genome Function is the perfect introduction to this challenging, dynamic, but ultimately fascinating discipline.

Nancy L. Craig received an A.B. in Biology and Chemistry from Bryn Mawr College in 1973 and a Ph.D. in Biochemistry in 1980 at Cornell University, where she worked on DNA repair with Jeff Roberts. She then worked on phage lambda recombination as a postdoctoral fellow with Howard Nash at the National Institutes of Health. She joined the faculty of Microbiology and Immunology at the University of California, San Francisco in 1984 and began her work on transposable elements. She joined the Department of Molecular Biology and Genetics at the Johns Hopkins University School of Medicine in 1991, where she is currently a Professor and a Howard Hughes Medical Institute Investigator, as well as the recipient of the Johns Hopkins University Alumni Association Excellence in Teaching Award. She is a Fellow of the American Academy of Microbiology, the American Academy of Arts and Sciences and the American Association for the Advancement of Science, and was elected to the National Academy of Sciences.

Rachel R. Green received a B.S. in chemistry from the University of Michigan in 1986 and a Ph.D. in Biological Chemistry from Harvard University in 1992, where she worked with Jack Szostak studying catalytic RNA. She then did postdoctoral work in the laboratory of Harry Noller at the University of California, Santa Cruz, studying the role played by the ribosomal RNAs in the function of the ribosome. She is currently a Professor in the Department of Molecular Biology and Genetics at The Johns Hopkins University School of Medicine, an Investigator of the Howard Hughes Medical Institute, and a member of the National Academy of Sciences. Her work continues to focus on the mechanism and regulation of translation in bacteria and eukaryotes. She is the recipient of a Johns Hopkins University School of Medicine Graduate Teaching Award.

Carol C. Greider received a B.A. from the University of California at Santa Barbara in 1983. In 1987, she received her Ph.D. from the University of California at Berkeley, where she worked with Elizabeth Blackburn, and co-discovered telomerase. In 1988, she went to Cold Spring Harbor Laboratory and was promoted to Senior Staff Scientist. In 1997 she moved to The Johns Hopkins University School of Medicine where she is currently the Daniel Nathans Professor and Director of the Department of Molecular Biology and Genetics, and a Bloomberg Distinguished Professor. Her work focuses on the mechanisms of telomere length regulation and short telomere syndromes, as well as telomeres in cancer. She is a member of the National Academy of Sciences and is the recipient of numerous awards. In 2009, she was awarded the Nobel Prize in Physiology or Medicine together with Elizabeth Blackburn and Jack Szostak for the discovery of telomerase.

Gisela G. Storz graduated from the University of Colorado at Boulder in 1984 with a B.A. in Biochemistry and received a Ph.D. in Biochemistry in 1988 from the University of California at Berkeley, where she worked for Bruce Ames. After postdoctoral fellowships with Sankar Adhya at the National Cancer Institute and Fred Ausubel at Harvard Medical School, she moved to the National Institute of Child Health and Human Development in Bethesda, where she is now an NIH Distinguished Investigator. Her research is focused on understanding gene regulation in response to environmental stress as well as elucidating the functions of regulatory RNAs and very small proteins. She is a member of the American Academy of Microbiology, American Academy of Arts and Sciences, and National Academy of Sciences, and received the American Society for Microbiology Eli Lilly Award.
Cynthia Wolberger received her A.B. in Physics from Cornell University in 1979 and a Ph.D. in Biophysics from Harvard University in 1987, where she worked with Stephen Harrison and Mark Ptashne on the structure of the phage 434 cro repressor bound to DNA. She went on to study the structures of eukaryotic protein-DNA complexes as a postdoctoral fellow, first in the laboratory of Robert Stroud and the University of California, San Francisco and then in the laboratory of Carl Pabo at The Johns Hopkins University School of Medicine, where she is now Professor of Biophysics and Biophysical Chemistry and an Investigator of the Howard Hughes Medical Institute. Her research focuses on the structural and biochemical mechanisms underlying transcriptional regulation and ubiquitin-mediated signalling. She is a Fellow of the American Association for the Advancement of Science and a member of the National Academy of Sciences and the American Academy of Arts and Sciences.