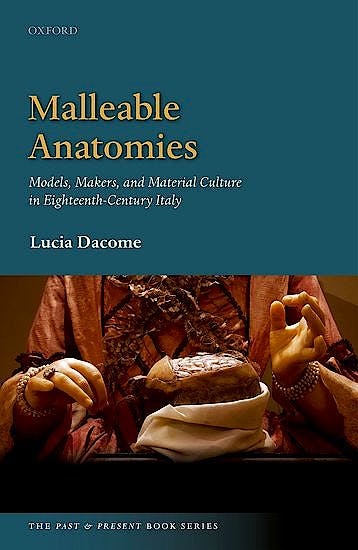 Malleable Anatomies offers an account of the early stages of the practice of anatomical modelling in mid-eighteenth-century Italy. It investigates the 'mania' for anatomical displays that swept the Italian peninsula, and traces the fashioning of anatomical models as important social, cultural, and political as well as medical tools. Over the course of the eighteenth century, anatomical specimens offered particularly accurate insights into the inner body. Being coloured, soft, malleable, and often life-size, they promised to fosteranatomical knowledge for different audiences in a delightful way. But how did anatomical models and preparations inscribe and mediate bodily knowledge? How did they change the way in which anatomical knowledge was created and communicated? And how didthey affect the lives of those involved in their production, display, viewing, and handling?

Examining the circumstances surrounding the creation and early viewing of anatomical displays in Bologna and Naples, Malleable Anatomies addresses these questions by reconstructing how anatomical modelling developed at the intersection of medical discourse, religious ritual, antiquarian and artistic cultures, and Grand Tour display. While doing so, it investigates the development of anatomical modelling in the context of the diverse worlds of visual and material practices that characterized the representation and display of the body in mid-eighteenth-century Italy. Drawing attention to the artisanal dimension of anatomical practice, and to the role of women as both makers and users of anatomical models, it considers how anatomical specimens lay at the centre of a composite world of social interactions, which led to the fashioning of modellers as anatomical celebrities. Moreover, it examines how anatomical displays transformed the proverbially gruesome practice of anatomy into an enthralling experience that engaged audiences' senses.

Lucia Dacome is an associate professor and Pauline M.H. Mazumdar Chair in the History of Medicine at the IHPST, University of Toronto. She received her PhD from the University of Cambridge and held postdoctoral fellowships at the Max Planck Institute for theHistory of Science in Berlin, the Wellcome Trust Centre for the History of Medicine at UCL, the UCLA Centre for seventeenth- and eighteenth-century studies in Los Angeles, and a Marie Curie Intra-European Fellowship supported by the European Commission at theCentre Alexandre Koyré/CNRS in Paris. Her research focuses on themes at the intersection of the history of medicine, the history of the body, the history of visual and material cultures of medicine, gender history, the history of the self, and that of medical practices and exchanges in the Mediterranean world.