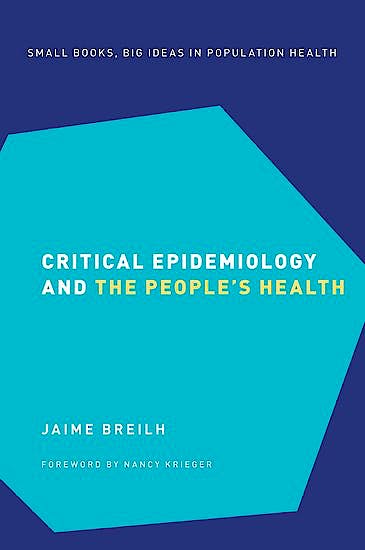 Critical Epidemiology and the People's Health

Foreword
Nancy Krieger
ACKNOWLEDGMENTS
ABOUT THE AUTHOR
Introduction: Critical epidemiology
1. Context, challenges and landmarks of critical epidemiology
2. Method and categories beyond the "knowledge illusion" of the Cartesian lineal causal bubble
3. The common good and the people´s awakening
BIBLIOGRAPHY
INDEX

The widespread growth of monopolies and big business has led to a fourth industrial revolution focused on producing fast, living fast, and dying fast for the sole benefit of accelerated profit. Despite unprecedented accumulations of wealth and industry, the world has watched as indicators of income inequality—a partial parameter of social inequity—have increased, while big business, with their nearly unrestricted influence, has increasingly distorted advancements in medical research.

Bold and incisive, Critical Epidemiology and the People's Health invites readers to the next great paradigm in public health by promoting a progressive, transdisciplinary, intercultural, community-building approach radically divergent from the presiding object-based, empiricist mode of thinking. A concise overview of the Latin American Social Medicine movement, this book introduces the work of leading scientist Jaime Breilh to a global English audience, focusing on key questions such as: What are the real challenges facing critical epidemiology during the current time of immense turmoil and inequity? How can we conduct responsible and sensitive public health research? What role does epidemiology play in addressing the societal ills of both the global North and South? And how can we create a more rigorous, updated, and effective epidemiology?

In addressing these questions, Critical Epidemiology and the People's Health offers readers a clear-eyed and much-needed perspective on how to overcome Cartesian reductionism with renewed methodological tools to address the rampant growth of injustices harming our global collective health and to subvert the reigning notions of health prevention and promotion.

Jaime Breilh, MD, PhD, is Director of the Collective Health Research Center and Laboratories (CILABSalud) and former rector (2016-2018) at the Andean University of Ecuador (UASB-E); and former President of the Ecuadorian Academy of Medicine (2014-2016). Dr. Breilh is internationally recognized as one of the founders of Latin American critical epidemiology and the Latin American Movement of Social Medicine/Collective Health. His work has been lauded for its groundbreaking contributions to the understanding of the social determinants of health, critical health theory, and alternative research methodology. Various universities have nominated him as honorary professor. He has been granted academic awards by the International Students Organization, University of California San Diego (2004); the Peter Wall Advanced Studies Institute, University of British Columbia (2012); the National Congress of Students of Ecuador (2018); and the Rector's Award, University of Antioquia, Colombia (2018).