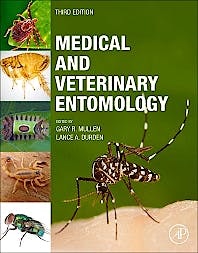 The first and second editions of Medical and Veterinary Entomology, edited by Gary R. Mullen and Lance A. Durden, published in 2002 and 2009, respectively, have been highly praised and become widely used as a textbook for classroom instruction. This fully revised third edition continues the focus on the diversity of arthropods affecting human and animal health, with separate chapters devoted to each of the taxonomic groups of insects and arachnids of medical or veterinary concern, including spiders, scorpions, mites, and ticks. Each chapter includes sections on taxonomy, morphology, life history, and behavior and ecology, with separate sections on those species of public-health and veterinary importance. Each concludes with approaches to management of pest species and prevention of arthropod-borne diseases. The third edition provides a comprehensive source for teaching medical and/or veterinary entomology at the college and university level, targeted particularly at upper-level undergraduate and graduate/postgraduate programs. In addition to its value as a student textbook, the volume has appeal to a much broader audience, specialists and non-specialists alike. It provides a key reference for biologists in general, entomologists, zoologists, parasitologists, physicians, public-health personnel, veterinarians, wildlife biologists, vector biologists, military entomologists, the general public and others seeking a readable, authoritative account on this important topic.