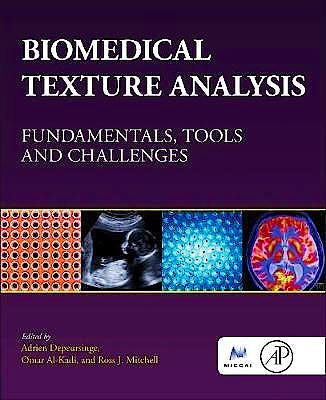 The fundamental properties of BTs are given to highlight key aspects of texture operator design, providing a foundation for biomedical engineers to build the next generation of biomedical texture operators. Examples of novel texture operators are described and their ability to characterize BTs are demonstrated in a variety of applications in radiology and digital histopathology. Recent open-source software frameworks which enable the extraction, exploration and analysis of 2D and 3D texture-based imaging biomarkers are also presented.

Omar S Al-Kadi received the PhD in Biomedical Engineering from the University of Sussex (Brighton, UK) in 2010, and the MSc. and BSc. in Information Technology and Biomedical Engineering from the University of Canberra (Canberra, Australia) and Cairo University (Cairo, Egypt) in 2003 and 2001, respectively. In 2010 he joined King Abdullah II School for Information Technology at the University of Jordan (Amman, Jordan) as an Assistant Professor, and in 2011 he was a Visiting Researcher in the Center for Vision, Speech and Signal Processing at the University of Surrey (Guildford, UK). During the period from 2013 to 2015 he was a Research Fellow at the Institute of Biomedical Engineering at the University of Oxford (Oxford, UK), working on improving 3D Ultrasound-based drug delivery strategies for liver tumor analysis and segmentation. He was also a Visiting Professor at the Medical Image Processing lab within the Institute of BioEngineering at the Swiss Federal Institute of Technology - Lausanne (EPFL) from 2015-2016. Since 2015, he holds the position of Associate Professor at King Abdullah II School for Information Technology at the University of Jordan. His research interest include developing novel approaches in image processing and analysis, such as texture analysis, image classification and segmentation, with a particular interest in medical imaging. J Ross Mitchell, PhD, is a Professor of Radiology in the Mayo Clinic College of Medicine, a Senior Associate Consultant in the Department of Research at Mayo Clinic in Arizona, and an Adjunct Professor in the Department of Biomedical Informatics at Arizona State University. His research is focused on Medical Imaging Informatics - new algorithms to extract information from medical images to improve the diagnosis, treatment, visualization and monitoring of disease. He has extensive expertise translating academic research into clinically impactful products. He is a Co-Founder, and the Founding Scientist, of Calgary Scientific Inc. (CSI), a company with over 100 employees and a suite of FDA Class II cleared products for diagnostic state-of-the-art GPU-driven mobile tele-radiology. These products include intellectual property developed in his academic lab. They have been licensed by a variety of companies, including General Electric, Siemens, Fuji, Medtronic, Hitachi, IBM, Dell, Cisco, Sprint, Verizon, and others. CSI products are available in 12 languages and 33 countries worldwide