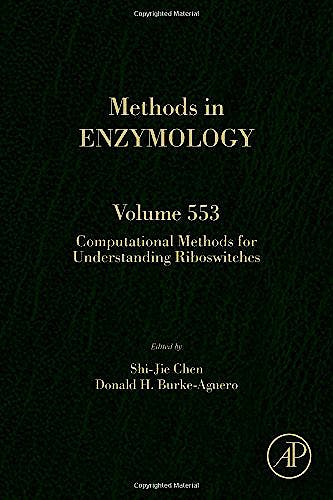 This new volume of Methods in Enzymology continues the legacy of this premier serial with quality chapters authored by leaders in the field. This volume covers computational prediction RNA structure and dynamics, including such topics as computational modeling of RNA secondary and tertiary structures, riboswitch dynamics, and ion-RNA, ligand-RNA and DNA-RNA interactions.

Shi-Jie Chen is Professor of the Department of Physics Astronomy and Department of Biochemistry and is core faculty member in the Informatics Institute at the University of Missouri-Columbia. Dr. Chen received his Ph.D. in Physics from the University of California, San Diego in 1994. He was a postdoctoral researcher at the University of California, San Francisco in 1994-9 and began his faculty appointment at the University of Missouri-Columbia in 1999. Chen has served the scientific community by his participation on multiple NIH review panels and site visit reviewer teams. He served as Associate Editor of the PLoS Computational Biology. His laboratory developed Vfold and TBI, open source and freely available web servers and software for the computational predictions of RNA structure, folding thermodynamics, and ion effects. Dr. Chen was elected to the fellow of American Physical Society in 2012.