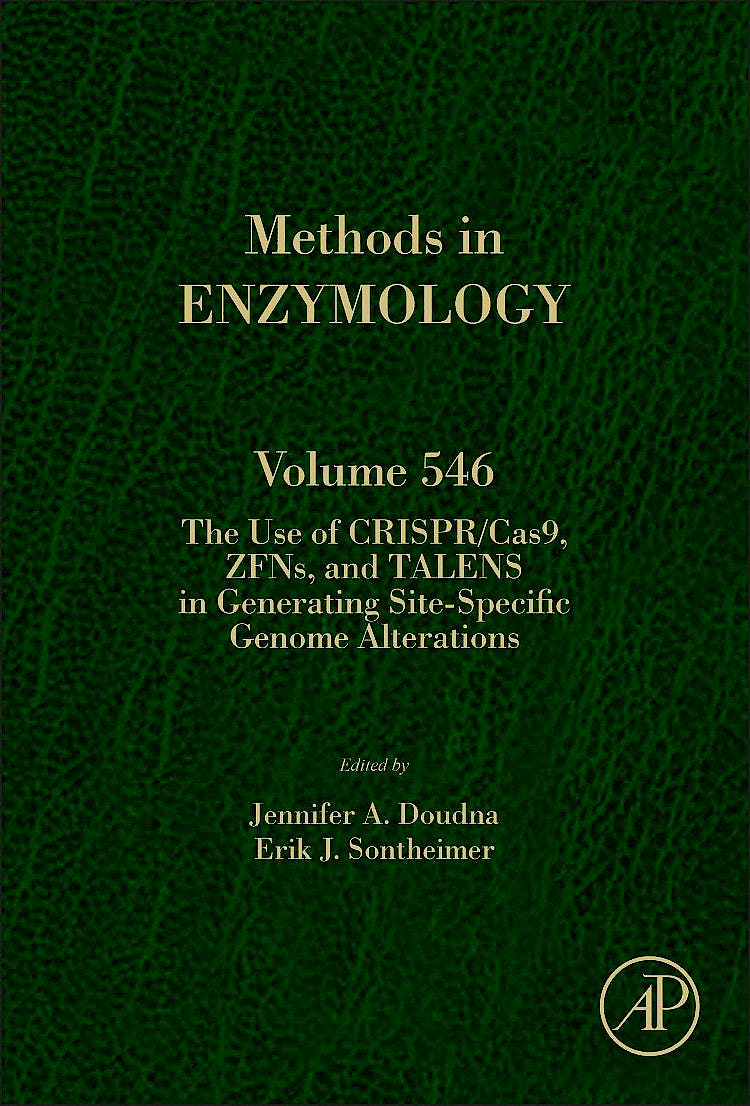 The Use of Crispr/cas9, Zfns, Talens in Generating Site Specific Genome Alterations (Methods in Enzymology, Vol. 546)

This new volume of Methods in Enzymology continues the legacy of this premier serial with quality chapters authored by leaders in the field. This volume covers recent research and methods development for changing the DNA sequence within the genomes of cells and organisms. Focusing on enzymes that generate double-strand breaks in DNA, the chapters describe use of molecular tools to introduce or delete genetic information at specific sites in the genomes of animal, plant and bacterial cells.

Jennifer A. Doudna, Ph.D., professor of Molecular and Cell Biology and Chemistry at the University of California, Berkeley and Howard Hughes Medical Institute investigator, has devoted her scientific career to revealing the secret life of RNA. Using the approaches of structural biology and biochemistry, Doudna’s work deciphering the molecular structure of RNA enzymes and other functional RNAs has shown how these seemingly simple molecules can carry out complex functions and can work together with proteins to control the information content of a cell.

Doudna grew up amidst the natural wonders of Hawaii, where she experienced volcanic eruptions, explored remote beaches and honed her body-surfing skills while living in the small town of Hilo on the Big Island. Doudna earned a B.A. in Biochemistry at Pomona College in 1985, where she worked with outstanding chemists Sharon Panasenko and Fred Grieman, and enjoyed the mentorship of many other great professors. She then worked with Jack Szostak at Harvard, completing her Ph.D. in 1989 on the develpoment of a self-replicating RNA based on the activity of a group I self-splicing intron. This work showed how RNA could function as both a template and a catalyst for generating copies of itself, a key propoerty of life. As a Lucille Markey postdoctoral associate with Tom Cech at University of Colorado at Boulder, Doudna began crystallizing catalytic RNA molecules with a goal of determining their three-dimensioanl structures and hence inlocking the key to their biochemical activities. She continued this work as a faculty member at Yale University, where she became a professor in 1994 in the Department of Molecular Biophysics and Biochemistry. In two landmark studies early in her career, Doudna and colleagues solved the crystal structures of two large RNAs - the P4-P6 domain of the Tetrahymena thermophila group I intron ribozyme and the hepatitis delta virus ribozyme. By determining their molecular structures, her work advanced the understanding of RNA’s ability to function as a catalyst in biological systems. In 2002, Doudna moved to the University of California at Berkeley, where her lab began studying the function of small RNAs that control the use of a cell’s genetic information. This led to her work on bacterial immune systems that employ RNA molecules derived from viruses to target and destroy foreign DNA. In collaboration with the lab of Emmanuelle Charpentier, Doudna and postdoctoral associate Martin Jinek discovered the function of an RNA-guided enzyme in the bacterial immune pathway, Cas9, whose ability to cut double-stranded DNA can be programmed by changing the guide RNA sequence. They recognized that such an activity could be employed as a molecular tool for precision genome engineering in various kinds of cells, a discovery that has triggered a revolution in the fields of molecular genetics and genomics.

Doudna’s work has been honored by numerous awards. She received the National Academy of Sciences Award for Initiatives in Research in 1999, and the Alan T. Waterman Award from the NSF in 2000. In 2001 she received the Eli Lilley Award in Biological Chemistry from the American Chemical Society, and in 2013 she was the recipient of the Mildred Cohn Award from ASBMB and the Hans Neurath Award from the Protein Society. She has been a Howard Hughes Medical Institute investigator since 1997 and a member of the National Academy of Sciences since 2002. She was named to the American Academy of Arts and Sciences in 2003 and elected to the Institute of Medicine in 2010. In 2014 she received the Lurie Prize from the Foundation for the NIH.

Erik J. Sontheimer, Ph.D., is Professor in the RNA Therapeutics Institute and the Program for Molecular Medicine at the University of Massachusetts Medical School. A native of Pittsburgh, he attended the Pennsylvania State University, where he received his B.S. in Molecular and Cell Biology in 1987. He then moved to the Department of Molecular Biophysics and Biochemistry at Yale University where he worked with Joan Steitz, completing his Ph.D. in 1992. His work at Yale revealed a dynamic network of RNA-RNA interactions that help to identify and excise non-coding “intron” sequences from eukaryotic messenger RNA precursors. He then did postdoctoral work with Joe Piccirilli in the Department of Biochemistry and Molecular Biology at the University of Chicago, where he was a Fellow of the Jane Coffin Childs Memorial Fund. While at Chicago he provided the first glimpses of the chemical strategies that eukaryotic cells use to catalyze the reactions that remove introns from pre-messenger RNAs.

In 1999, Sontheimer joined the faculty in the Department of Molecular Biosciences at Northwestern University in Evanston, Illinois, where he continued his work on the mechanisms of pre-mRNA splicing. He also turned his attention to small RNA-based gene regulation, and his laboratory made fundamental contributions to the understanding of RNA interference pathways. In 2008 his laboratory also began working on genetic interference mechanisms in pathogenic bacteria. Among other advances, they provided the first demonstration that small RNAs known as CRISPR RNAs target DNA molecules directly, paving the way for the development of RNA-guided genome engineering applications. While at Northwestern, he received a CAREER Award from the National Science Foundation, a New Investigator Award in the Basic Pharmacological Sciences from the Burroughs Wellcome Fund, a Basil O’Conner Award from the March of Dimes, a Scholar Award from the American Cancer Society, a Distinguished Teaching Award from the Weinberg College of Arts and Sciences, and the 2008 Nestle Award from the American Society for Microbiology. In the summer of 2014 he moved to the RNA Therapeutics Institute at the University of Massachusetts Medical School in Worcester, Massachusetts, where he is continuing his research on the fundamental roles of RNA molecules in gene expression, and on the uses of RNA molecules in biomedical research and the treatment of human disease.