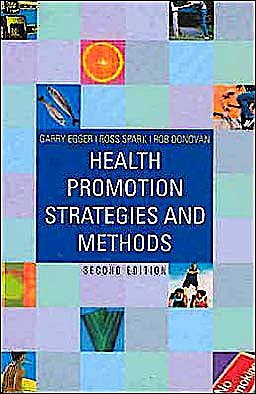 This new edition will continue to articulate the key principles and processes of health promotion to enable the practitioner to select, plan and implement effective programs for the promotion of better health for any issue, group or location. It will be updated throughout to reflect advances in the field, in particular the sections on clinical health, social marketing and the media, as well as the environment. New diagrams and case studies will also be included. The authors are leading practitioners in the field, particularly Garry Egger who has a high profile and strong reputation among health practitioners. More recently, Garry has headed up the Gutbusters campaign with well-known nutritionist, Rosemary Stanton, to combat obesity in adults and children.

· Rob Donovan
Professor Rob Donovan (PhD Psychology) is a registered psychologist. He holds the Cancer Council of WA Chair in Behavioural Research and is Director of the Centre for Behavioural Research in Cancer Control in the Division of Health Sciences at Curtin University. In 1974 he founded a market & social research company, which achieved a premier reputation in Australia and was acquired in 1998 by NFO-WorldWide. He has held marketing positions at the University of WA, Pace University, New York University and the University of Georgia, and has been a visiting scientist at the US Centers for Disease Control and Prevention in Atlanta, Georgia. He has over 30 years experience in conducting research and developing communication strategies to achieve belief, attitude and behavioural change for state and commonwealth governments, NGOs and national brand advertisers. He is (co) author of over 100 refereed journal articles and book chapters in psychology, health and marketing, and has (co) authored three books on health promotion, the media, and social marketing. In addition to behavioural aspects of cancer control, he has a diverse range of interests having served on the National Expert Advisory Committee on Tobacco (NEACT) and the Australian Health Minister's National Obesity Taskforce Scientific Reference Group, and is a member of the Western Australian Domestic Violence Campaign Advisory Committee and the World Anti-Doping Agency's Ethics and Education Committee.

· Garry Egger
Garry Egger MPH PhD MAPs is the Director of the Centre for Health Promotion and Research in Sydney and an Adjunct Professor in Lifestyle Medicine at Southern Cross University in Lismore NSW. He has worked in clinical and public health since 1972, and has been a consultant to the World Health Organisation, Industry and several government organisations, as well as being involved in medical and allied health education. He is the author of 25 books, over 100 scientific articles and numerous popular press articles and appearances.